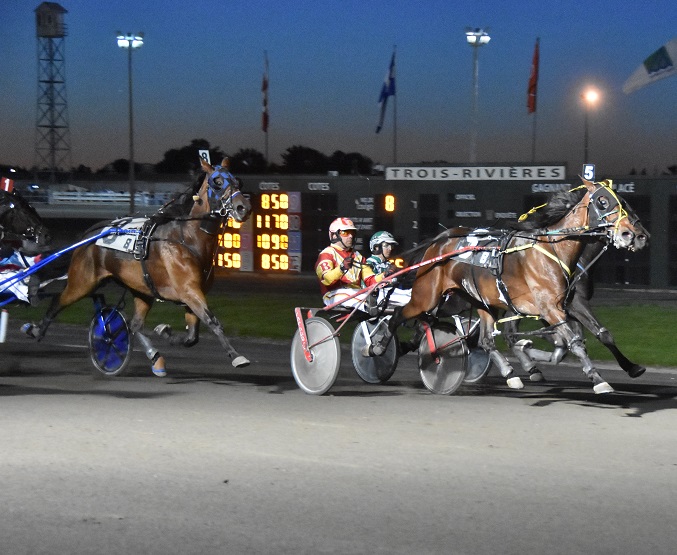 Trois-Rivieres, QC – One of only two mares in the field against six male rivals, Talbotcreek Suzie and driver Stephane Brosseau showed their heels to the field in capturing the 8th race Preferred-Invitational Trot Friday at the Hippodrome 3R.

Leaving from post five, Brosseau sent Talbotcreek Suzie right to the front with Missionoftheheart (Tyler Jones) leaving and grabbing the two-hole seat. Then before the opening quarter mile in :28.3, driver Justin Filion came first-over with Kinnder Dangerous, but they were unable to clear to the lead and ended up parked first-over the entire mile.

Talbotcreek Suzie was able to maintain control as they passed the half mile marker in :57.3 with Kinnder Dangerous sitting right on her shoulder. They raced down the backstretch and past the three-quarters in 1:27.3.

Then on the final turn, driver Pascal Berube had Holiday Party in high gear as they circled four-wide with plenty of speed. Down the stretch, Kinnder Dangerous began to fade, Holiday Party continued to close well but Talbotcreek Suzie was game to the wire, winning by a head over Holiday Party with Missionoftheheart third.

For Talbotcreek Suzie, a seven-year-old mare by Angus Hall, it was her fourth victory of the season for trainer Yves Tessier and owner Francis Morin of Beauceville. She paid $8.50 to win.

Harness racing trainer/driver, RichardTalbotcreek “The Black Cat” Simard, made a triumph return to racing Friday, winning the 5th race trot with Orlys Fury ($22.50). It was back on April 20 that Simard fell with a horse at the farm and broke his wrist. This was his first pari-mutuel drive since the accident. Simard also trains Orlys Fury.

Pierre Luc Roy led all drivers Friday with two wins. Yves Tessier was tops for the trainers as he also has two winners.

Track Notes: Live racing resumes at the Hippodrome 3R on Sunday with first race post time at 1:00 pm. Featured in the 8th race Preferred-Handicap Pace is Outlaw Turn N Burn (post 8), who has won two of his last three starts, Requested (post 6), the winningest horse at H3R last season and Appleby Hanover (post 2), who is going for his third straight win. For a free race program, visit www.quebecjockeyclub.com.