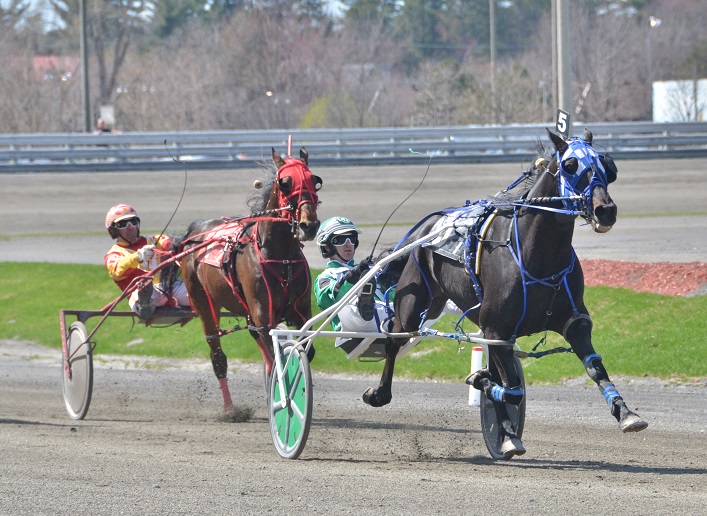 Trois-Rivieres, QC – Surf Report, a 22-1 long shot, was given a perfect drive by Tyler Jones in capturing the seventh race Preferred Handicap Pace feature at the Hippodrome 3R Sunday and paid a handsome $47.60 to win.

It was the 15th start of the season for the seven-year-old son of Sportswriter and its second straight win and fourth triumph of the year for trainer Francis Guillemettel of Trois-Rivieres, who owns the horse.

Surf Report left from post five and led the entire one-mile race with Jones in the sulky, holding the field at bay throughout the race. He won by three and one-half lengths over Bali (Stephane Brosseau) and Windsun Cheyene (Pierre Luc Roy).

Rocky Boy and driver Marc Belander sat a perfect two-hole trip behind pacesetter R Rkadabra (Pascal Berube) in the eighth race feature trot and rallied in the stretch to win by one and three-quarter lengths in 2:00.

R Rkadabra was able to hold for second place with Dance Hall George (Francis Picard) third. It was the first start of the season for Rocky Boy, who is trained and co-owned by Stephane Beaudoini with Marc Belanger. He paid $11.40 to win. Beaudoini led all trainers on Sunday sending out two winners.

William Roy made his first pari-mutuel start as a harness racing driver in the sixth race with Buckeye Babe who finished a respectable fifth place.

From the Quebec Jockey Club