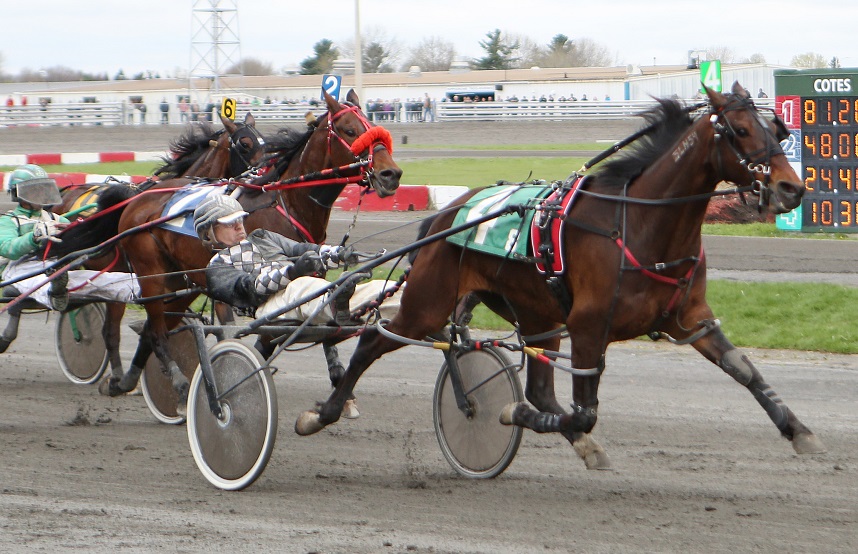 Trois-Rivieres, QC – It was the first time ever that Outlaw Turn N Burn had ever been to the Hippodrome 3R and he turned it into a big victory Sunday in the 8th race Preferred-Handicap Pace.

With driver Francis Picard in the sulky, Outlaw Turn N Burn left from post four but was unable to grab the early lead away from Chaleurs Ad (Jocelyn Gendron), who forced Picard to stuff Outlaw Turn N Burn into the two-hole by the opening quarter mile in :27.3.

They raced that way to the half mile marker in :56.4 as Surf Report, going for his third straight win at H3R for driver Tyler Jones, came first-over to challenge.

Racing down the backstretch, Jones was unable to collar Chaleurs Ad on the front-end, so coming into the final turn, Rose Run Slider (Stephane Gendron) was coming three-wide to loop the field, but Picard had other ideas, pulling the pocket with Outlaw Turn N Burn.

As they came down the stretch, Outlaw Turn N Burn just pulled away strongly at the finish to win by two lengths in 1:56.1. Chaleurs Ad held for second place with Windsun Cheyenne (Marie Claude Auger) third.

It was the first win in seven starts this year. The winner’s circle was packed with people for the owners, the Perle Royale Stable, was celebrating in grand style with the victory. Outlaw Turn N Burn paid $10.30 to win.

Upvote Hanover and Brosseau were able to clear by the race leader on the final turn and then pull away for a two and three-quarter length triumph in 2:01.

Rocky Boy (Marc Belanger) made a bold three-wide move from sixth place on the final turn and closed well to be second. Holiday Party was third.

Trained by Yves Tessier for owner Francis Morin of Beauceville, it was the second win this year for Upvote Hanover, who paid $3.30 to win.

Track Notes: Driver Pascal Berube was the hot driver at the Hippodrome 3R Sunday as he scored a quick three wins, capturing both ends of the daily double and also the third race. Isabelle Binet led all trainers with two wins.