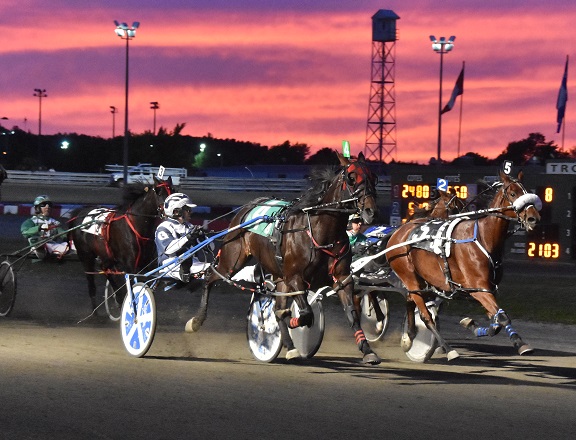 Something unique takes place on Friday night in the very first race as the ten-year-old pacing mare, Persistent, returns to racing after being a broodmare since 2014.

Persistent starts from post one in the first race for driver Stephen Gendron and owner/trainer Michel Allard of Saint-Esprit, he is the father of Rene and Simon Allard.

Back in the day, Persistent was a good raceway mare with lifetime earnings of more than $226,000 and a race record of 1:50.2 at Harrah’s Philadelphia. She competed regularly at both Harrah’s and Yonkers Raceway.

Now, as a broodmare, Persistent, sired by Western Ideal, also did well.  Her very first foal, a filly by Bettor’s Delight named Persistent Bettor, has a record of 1:54 with earnings of $42,853. The next foal was a full sister named Persistent Xample, who won a qualifier in 1:57. There are two other foals, one is a two-year-old, the other just a yearling.

According to Michel Allard, “She should be very comfortable on the track at Trois-Rivières and she seems to have rediscovered after all these years off, the pleasure of competing.”

Upvote Hanover, fresh off his impressive triumph last week, returns to headline the 7th race Preferred-Handicap Trot. The week the five-year-old gelding by Kadabra starts from the far outside in post eight.

Last week Upvote Hanover was at his best for regular driver Stephane Brosseau, getting parked out first-over for half the mile and still having enough kick to pull away from the field with a three and one-half length romp.  He has now won two of his last three starts for trainer Yves Tessier and owner Francois Morin of Beauceville.