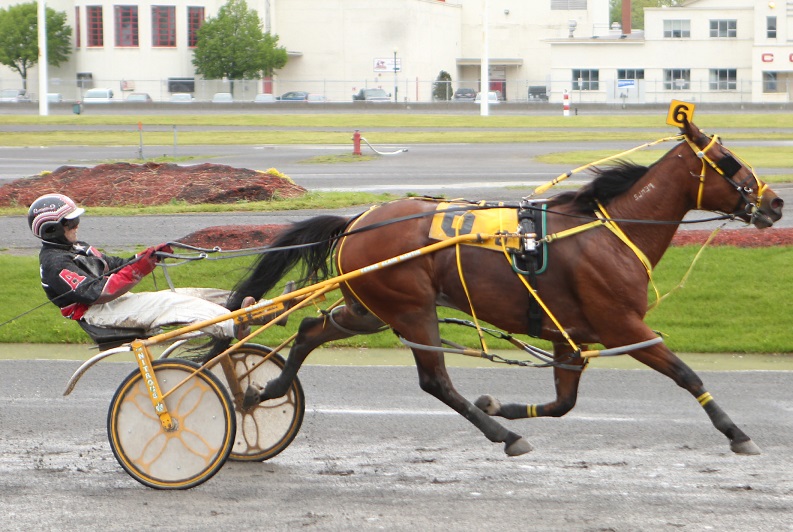 Racing over a rain-soaked track labled good with a two-second allowance, driver Marie Claude Auger sent Atomic Million AM right to the front in the sixth race feature.

Going to the opening quarter mile in :27.3, the pocket-sitting Windsum Cheyenne with driver Stephane Gendron, pulled the pocket to challenge Atomic Million AM and Auger forced Gendron to take his horse right back into the pocket trip.

They raced to the half mile in :57.1 as Outlaw Turn N Burn (Francis Picard) came first-over and despite a valiant effort, was unable to collar the race leader down the backstretch and to the three-quarter mile marker in 1:26.3.

Around the final turn, Auger let Atomic Million AM have his head and the gelded son of Million Dollar Cam pulled away from the field in the stretch, winning by four and three-quarter open lengths in 1:56.4. Ufdragon Rocket (Pascal Berube) was second with Windsum Cheyenne third.

It was the first win of the 2019 season after three starts for Atomic Million AM. He was bred and is owned and trained by Alain Martin of Gatineau. The bargain of the day at the betting windows was Atomic Million AM going off at odds of 3-1 and paid a generous $8.60 to win.

Track Notes: Requested, the winningest horse at H3R last year, gave notice he is back in the hunt again in 2019, winning the Preferred II Pace with ease for driver Jocelyn Gendron in 1:57.3 on the off-track. He paid a generous $12.30 to win. Stephane Gendron led all drivers on Sunday with four winners. Michel Allard led all trainers with two wins. Gendron now leads all drivers at the meet with 12 wins. Isabelle Binet leads the training ranks with 6 wins from her stable. Live racing resumes at the Hippodrome 3R on Friday evening, first race post time at 7:00 pm. For more information, visit www.quebecjockeyclub.com.